A few people have asked how my day at the Indie Pop-Up Signing in Bristol, this weekend, went. So, whenever I’m asked a question that requires more than a one-syllable reply, I blog about it 🙂

I’ve not done a signing on this scale before, so I wasn’t sure what to expect. Everyone else seemed to know each other! But I got chatting to a few authors throughout the day, and of course lots of readers.

When I’ve done small signings at my local bookshops and libraries, it’s always felt like people are actively avoiding eye-contact with me – perhaps they think I’m going to force them to buy all my books, I don’t know. But at my table, in a room of readers who wanted to talk to authors, I spoke with lots of lovely people, gave out lots of postcards and pens, and had a generally great time.

I even sold a couple of books! 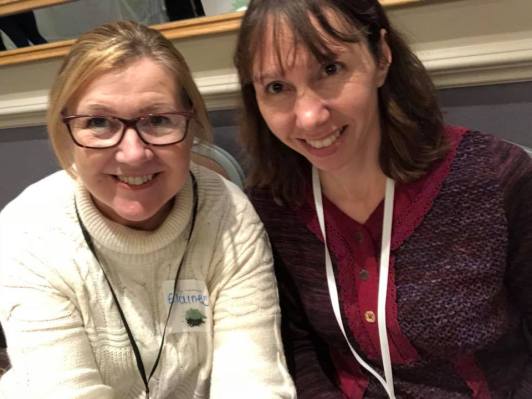 The volunteers, who kept us plied with drinks and biscuits, didn’t stop all day, it seemed, dropping by regularly to check whether we needed anything.

My table – my view out (taken just as the afternoon doors were being opened), and from in front. My beautiful book stand received a lot of positive comments, too 🙂

It was a long day –  busy but fun – and I slept well that night! We didn’t go straight home. We visited the Clarks Village in Street the next day and I shopped…

How was your weekend?

Every time I write a post for this blog, I realise how long it’s been since the last one. Instead, I’ve been novelling (yes, squiggly little red line, that is a word if I want it to be!)

Progress on the novel is still going well, but the actual details haven’t changed since the last post I wrote about it – although I can’t believe I said that after Chapter 12 everything would tick along smoothly!!

So it’s finally Christmas! Yay! It always takes time to get myself excited by Christmas – but once I am, I really am. This year I had some inspired present ideas for my parents, which is mostly never the case, so I’m feeling pretty proud of myself right now.

You can find out the details on the event’s Facebook page, and on the Eventbrite page too.

The giveaway will be happening via my newsletter, which you can sign up to here.

Sign up before the 29th December to receive the email with the giveaway attached! Even if you can’t get to Bristol/the South West/England in January, why not sign up to the newsletter anyway? One of my New Year’s Resolutions is to giveaway more chocolate 🙂

If you celebrate Christmas, I wish you a very merry one, and Happy New Year to all of you. Thank you for reading my blog this year xx

I always know when I’m neglecting blogging, because my email notifications cease, and my inbox is really quiet! In fact, I’ve been working so hard that the onset of July almost passed me by.

But it’s all been for a good reason – my WIP is flying. Now, whether it’s a good flight or not, I’ll have to wait and see.

In my last blog about my attempt to write this novel in a year, I mentioned that due going back and editing the first part, my deadline would have to be extended – I made it 4th August… but I’m going to completely smash that!

The flat parts of the graph were where I was editing the print-out, and the big boost straight after was were I made all the changes on the computer. There’s a method here… honest 🙂

I’ve made some huge changes with chapter layout too – merging some, separating some, going back and re-merging others. It’s a complete mess, although I think I’ve got a handle on it now.

I thought I’d be adding a new character, but in fact he only turned up for a brief conversation. I think I solved the other issue of my MC being too scared too quickly. I’ve noticed I’m overusing the words ‘now’ and ‘of course’. In fact on one page, I used ‘now’ in every single paragraph – d’oh!

In other news, tickets for a signing I’m attending in Bristol in January 2018 are on sale now! If you’re in the Bristol/willing to travel to Bristol area, check out this Facebook page for more info.

The gym where I work, and train, is being refurbished which has caused me great excitement – in fact, some people would say (have said…) an obsessive level, but I don’t care. I’ve already designed my new programme to make the most of the new kit.

I found these – cappuccino milk chocolate digestive thins – scrumptious and yummy, and further confirmation that I love all things coffee-flavoured except coffee!

What are your recent snack discoveries?