And, here’s another Where Words Fail Music Speaks author interview.

Don’t forget to buy your copy on Amazon, available on Kindle and in paperback, with all proceeds going to the Clusterbusters charity

I’m Audrina Lane, an author since I turned 40 (4 years ago) and live in Ross-on-Wye, Herefordshire with my partner Steve and two black Labradors called Rael and Lilly. I work full-time for the Library Service, used to drive a Mobile Library Van around the countryside and fit my writing in around all of this! I also love eighties music especially George Michael and dancing.

I’ve known Karen through Facebook for a while and when I saw she was putting this together I leapt at the chance to be involved. I also suffer occasional migraines so the thought of having prolonged suffering of headaches much worse than this made me want to do something to help raise both money & awareness.

I submitted 2 poems for the anthology and I just googled 90’s Brit Pop song titles. Scrolling through the list, I did a small shortlist of around 8 and from that got it down to the two that most resonated with my poem ideas.

For the ‘Road Rage’ poem I drew upon what I’d read about the condition of clusterheadaches. And for my ‘Disco 2000’ poem the title sparked the subject of the poem.

I guess submitting poems may not reflect that I have 5 books published. I love writing poetry when the mood or subject matter grabs me, so with this submission it was the subject that created the words. I’m hoping to eventually have enough poems to create an anthology collection of my own work.

I must be a glutton for punishment as I’m currently working on two novels at the same time. One is the sequel to my Bloodstained Heart Series about the evil, bitch character that appeared in my Heart Trilogy series – the fans of that wanted to know what made her the way she was. Equally they told me they still didn’t want to like her at the end of the books! It’s been a great, but sometimes slow project, as I have to cross reference back to my original novels and am re-writing the same scenes but from her point of view. It’s also fun to write someone who is so horrible to everyone else.

The other project is just at the editing stage ready for release in June. It’s collaboration with another author called Rita Ames called ‘24Hrs to Love’. It is the first book in a series of 3 set at the most prestigious motor races – Le Mans, The Indy 500 and Monaco Grand Prix. Each will be standalones but all will be romances. We each write as a separate character and switch between the two writing alternate chapters. This has been a light relief to my other work in progress and I have enjoyed writing as a guy!

I guess it’s all the fantastic friends I have made within the writing community. I love my readers who are so loyal, lovely and patient! Equally I love all other authors who are doing the same as me, and have offered help and advice over the past 4 years. Being part of this crazy community makes everything worthwhile.

I’d love to write full-time but just don’t think that will be happening anytime soon. So I’ll stick with saying still writing and still working enough to pay for the writing projects. 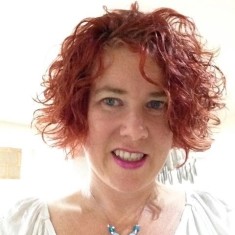 Audrina lives in Ross-on-Wye, Herefordshire with her partner Steve and her two black Labradors Rael & Lily.

She is the author of the fabulous Heart Trilogy series,  made up of the novels Where did your Heart go?, Un-break my Heart and Closer to the Heart. She has also completed the first part of a standalone 2 part series called Bloodstained Heart. Part 1 – Passion and coming soon Part 2 – Revenge. These are connected to The Heart Trilogy series in that they feature the full story of Felicity.

Audrina really loves writing, reading, listening and dancing to eighties pop music, and watching Formula 1, and is currently working on a motor racing collaboration with another author. Her poetry and short stories have been featured in a couple of anthologies and all her novels can be found on Amazon.

12 thoughts on “Audrina Lane: an interview”

Is Zenna a muse, a sleep-deprived apparition, or something much more sinister?